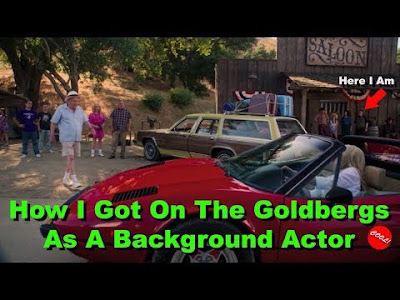 I love making films. Being on the film set is amazing, so much is going on, you never know what is going to happen next. Magic happens on the set.

Over the years, I have been in a lot of student films, shorts, and feature films, so I am used to a set.  Each one there is a life of its own.  There is a vibe that you can sense being on set.  Films are different, the crew is different, the director and lead actors are all different on each set.  It is fun to be a small part of this magic.

Since I know people in the film business, I have learned how to get on larger sets.  One way to get on them is by being a background actor, or as most people know it, an extra!  When a film production needs a restaurant scene, they have to have people in there that look like they are eating and serving.  If the stars of the film are eating an empty restaurant, it looks weird and fake.  So you have to have background actors.  You do not notice them, however, you do know when they are not there.

I have been a background actor on two feature films and seven television shows.  As an independent filmmaker, I can watch the professionals work their magic and learn from them.  Even if I do not get into the final cut of the film, I still learned a lot and met some cool people.  Learning how to become a better filmmaker is a never ending process.

If you would have told the young me that one day you would be on television and feature motion pictures, it would have been hard to believe that.  At times, I still do not believe it.  Life is cool.  Dreams can come true.

How I Got On The Goldbergs As A Background Actor