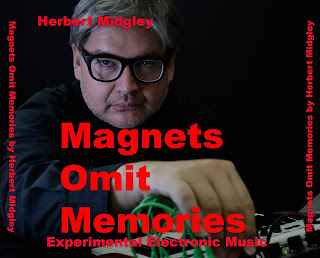 I recorded the Magnets Omit Memories CD last summer using a Moog Mother-32 Semi-Modular Eurorack Analog Synthesizer and Step Sequencer without any digital editing. It took a few months to get artwork and selection list down.  It takes a while to make not only the music, also all of the other things needed to make a CD.

Twenty years ago, I would have been amazed at the quality of this CD.  The CD artwork is amazing!  Also, I can have anyone from all over the world buy it for five dollars.  Back then, I would have paid five dollars for one of these CDs and sold it for ten to twelve bucks.  Times have changed.

Today no one wants a physical copy of a CD or to pay for music.  Most people today don't have a CD player in their car, and the CD player they have in the house is rarely used.  People have moved the clutter of CDs and DVDs out of their houses and moved to digital formats.  If you ask most people the last time they bought music in any format, it has been years for the average person.

Video on Demand and Audio on Demand is what today's technologic savvy costumers want.  They have cell phones that cost over a thousand dollars, they don't want technology from the mid-1980s to listen to music.   Now they 'talk' to their phone and tell it what song they want to hear.  Same with video.

When bands play live, only the diehard fans or people that want to support musicians buy their CDs.  I doubt anyone even bothers to open them up.  They find the music online and listen to it in their cars via Bluetooth.  The CDs go in a pile of junk storage before it is donated to charity or the trash can.

However, we miss the amazing artwork of albums.   When we moved from vinyl to cassettes, the artwork shrunk down in size.  It got a bit larger when Compact Discs replaced cassettes.  I love getting vintage vinyl just to look at the album art.  It is a small piece of art that you could hang on the wall.  To listen to the music, I search the web to hear it.  Most of the time, it is online to listen to without dusting off the record player.

I've worked with the computers since the 1980s and I know that hard drives fail at some point.  The cloud is just a bunch of bigger, faster hard drives connected to the internet that will fail at some time in the future.  They will continue to move the digital information to the next 'hard drive', one day, they won't.  That music will be lost to the cloud.  Streaming services will disappear also.  The movies and music you listen to online will move to the next cool and hip technology the future will bring.  Or not.

You no longer own the music or video, you are really licensing it.  At any point, the company that owns that license can pull it from you.  Buying digital content on the cloud can digitally disappear.  Having a physical copy of a DVD or CD will work for over a hundred years, not sure if the DVD and CD players will be around too much longer.  Good luck finding one that works forty years from now.  Maybe even twenty years from now.  The physical copy of your DVD and CD is yours, you own it to listen to until it fails.  Which, it will.  All media falls apart with time.  Time is the predator which constantly stalks us and our technology.  Time will win in the end.

Enjoy your music while you still can!

Here are the links to this amazing experimental electronic music CD.  It may change your life if you get it and listen to it while you still have that option! 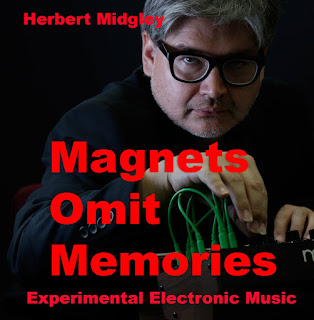 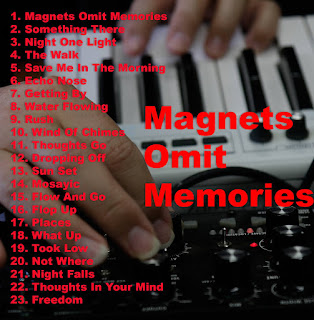 Magnets Omit Memories CDMagnets Omit Memories Digital Download
I really hope you will enjoy this experimental electronic music, I only used the sounds that I created from the
Moog Mother-32 Semi-Modular Eurorack Analog Synthesizer and Step Sequencer without any digital editing.
If I made a mistake, I went back and re-record the entire track.

The concept of this album is about living your life to the fullest way possible.

For me, many things can not be said in words, however, I can express them in experimental electronic music.
Thank you for listening to Magnets Omit Memories.