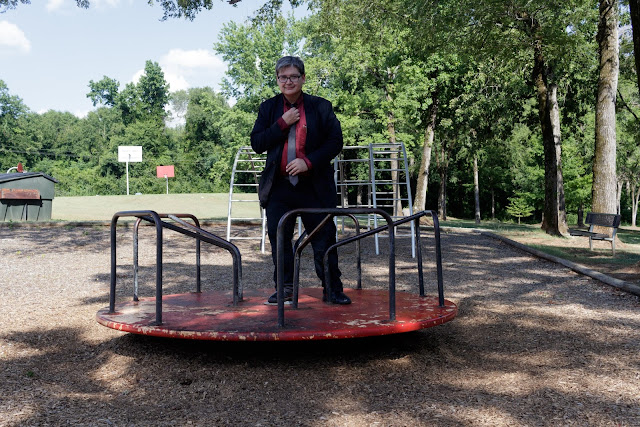 When I was a child, when I went to the park there were three staples, a swing set, a slide and a Merry-Go-Round.  I loved all of them, the Merry-Go-Round did get me dizzy so I could ride it slow.  I remember one time going to the park and riding the Merry-Go-Round the slowest speed that I could get to move.  After thirty minutes are so of doing this, I felt a bit nauseous, so I stopped.  Then I did it again because it was fun.  I was in control of the ride, I was like those that work in a carnival.  Life was grand.

At times I would ride the swings so high it was like the swing was going to overturn at each peak of the axis.  Some would jump off at the highest point in the arch, I would wait for it to slow a bit down and jump off at under my height.  The swing was also cool to just sit and think about life as it barely moved.  I thought about many things as a kid sitting on a swing.

Slides were fun and were close to those carnival rides that I used to see at the fairs.  I remember sliding down a slide on a hot day and getting burn as I rode down in the shorts that I was wearing.  Running up the slide to ride it over and over again was just fun.  These were great times!

Let's look at the data: 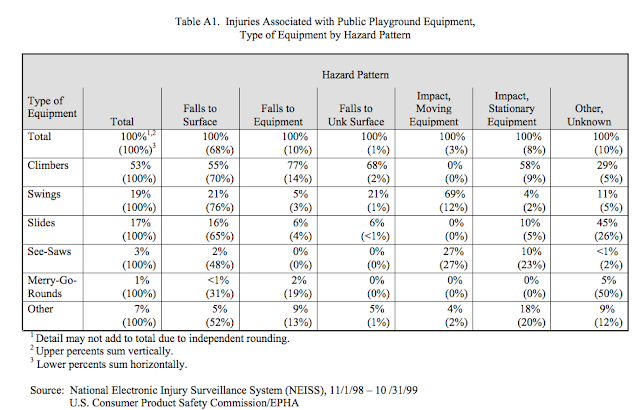 As you can see here that the Merry-Go-Rounds are in LAST PLACE on the list!  Number one are climbers with swings being number two and slides rounding up the top three playground equipment injury rates!  So the data isn't there against Merry-Go-Rounds.  It is only the public looking at a Merry-Go-Rounds and thinking, 'well it goes around in a circle and I remember doing dangerous stuff on a Merry-Go-Round, so let's get rid of them'.  'You could break your arm or leg in one of those Merry-Go-Rounds'.  'Merry-Go-Rounds are going to make the park's insurance rates jump through the roof!'

However, the data isn't there.  It makes me sad that most young people will never get a chance to play on a Merry-Go-Round.  There are a few out there, so if you have kids, find them a Merry-Go-Round and have fun with them before there are all gone!!!!