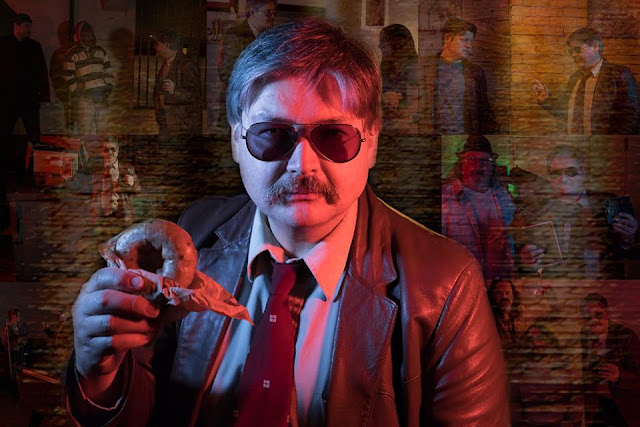 I have been making films since I got a VCR camcorder in the mid 1990's. Then iMovie, firewire and DV camcorders came out in the late 1990's and this changed my very limited videos to something that could look professional.   The idea of making films has been intriguing to me my whole life, however it wasn't until the 1990's that I could afford to get a camera to film.

Today if I was in elementary or middle school, I could just use my smart phone and I have a production studio that fits into my hands.  However for me I had to wait until technology got economical for me use.  Today with all of the content on YouTube, anyone with a little technical skill can make a movie or TV show.

In the early 2000's I became a one man movie making machine.  Once Google Video and YouTube came out, I now had a platform to share my films, educational material and avant-garde art films with the world.  I could wake up, make a film, edit it, compose music for it, bounce it down then post it to the web for the everyone to see.  The idea of having the ability to make and create something and instantaneously share it with anyone online was and still is amazing to me.  I knew that I could use this new medium to make art that no one else could do.  The Internet Legend was born.

This week I passed eight million views on my YouTube Channel.  I know today that some of the large channels can do this with one video, however this still amazes me.  People watch thousands of hours of my work a year.  Wow!  Not bad for a small town country boy.

Over the years I have worked others to make films and of course the classic sci-fi film, THE RISE OF THE ROBOTS.  We had a large crew and it was an amazing experience.  I have worked as crew and other positions on my friends' feature and short films.  Having a crew is great!

However I do love when I wake up and decide I am going to make a film today, and go out there with a camera, sticks, lights and sound kit and make it happen myself.  Over the Christmas holiday I wanted to see what would happen if I starred, wrote, shot, edited, color corrected, made the SFX and composed the music for a short film.  No crew, only me doing all of the crew positions.  How good would it look?  Can I make a cinematic film with only myself as crew?

On The Brick Streets Of Nacogdoches - Short Film is the result.  Watch the film yourself and decide.  Let me know what you think.  I am so thankful to the wonderful actors that gave their time to this project!  Thank you!

Myself, I thought it looked great, moved fast, was fun to watch and the feedback so far has been great.  If I would compare it to other short films I have seen in the last few years, I would say it looks as good and at times, better then many of them.  It could be that technology is making it easier for a solo filmmaking, or that with over 4000 videos that I have posted on YouTube, that I have a ton of experience making films.   Perhaps a bit of both.

To all of my filmmaking friends out there on the internet, I would like to challenge you to make a short film yourself without a crew.  Crew all of the positions.  If you do this, let me know, I would love to see the result!

On The Brick Streets Of Nacogdoches - Short Film

How I Make Films Without A Crew : Behind The Scenes With Herbert Midgley Independent Filmmaker

How To Use A Lavalier Microphone For Your Phone

How To Use A Bounce Board (Reflector) On An Overcast Day

One Of The Hardest Things About Being An Actor

How To Be A Realistic Actor