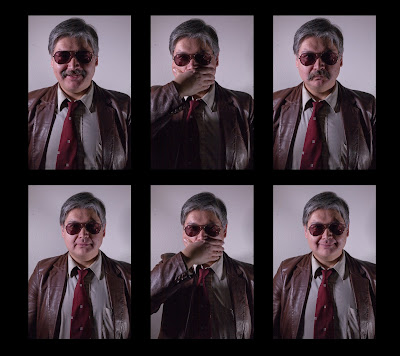 Growing a mustache took me a while.  I had a bad one in high school, trying to look older, I didn't look any older, only looked like a sixteen-year-old with a half grown mustache.  At the time, I thought I looked cool.  No one said anything, we all knew it was a bad mustache and the world would be a better place if I just took a new razor to the hair under my nose.  I wised up and did that one day.  And the world at my high school was a better place.  No one thanked me, we all just knew it.

As time went on, I could finally grow an epic mustache.  A mustache that others would love to have.  One that others could never grow in ten lifetimes!  And I could grow one in a few weeks.  Others would pale in the greatness of my mustache and could only dream of having a mustache so amazing.

However, when I wear a mustache, I am treated differently.  The clean shaved and neat tight hair self is treated better.  A lot better.  The mustached self, not so much.

For some reason, mustaches are not as popular as they used to be.  Today, there are tons of goatees, half beard, half something else.  Beards are everywhere.  But not too many mustaches.  They are a few holdouts from the past, a few hipsters, some that are oblivious to what others think, a few rebellious ones, and few people that just don't care.  They wear their mustaches with pride.

It is a shame not more mustaches are out there.  In the past, a mustache was a sign of dignity.  One could only grow a mustache after a lifetime of living.  If you had a mustache, people knew that you have put a lot of work into growing and maintaining your mustache.  You were a somebody!

I love having a mustache, today I mainly grow one out for an acting part.  Sometimes I grow one to be different.  To stand out in the crowd in the sea of beards and goatees.  To be an individual!