Why THE RISE OF THE ROBOTS is the greatest film ever made in East Texas? 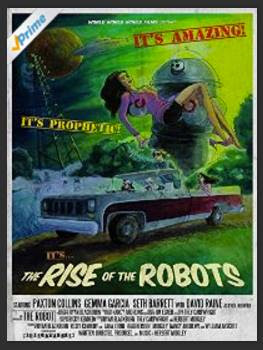 Why is THE RISE OF THE ROBOTS the greatest film ever made in East Texas?  In the summer of 2012, a band of filmmakers got together to set out to make a little film and didn't know it would change the world.  There were four main actors, about twenty crew members, the writer/director and hundreds of extras.  The plot of the film is that Robots take over humanity by using the technology everybody had, cell phones.  The motley crew of misfits that didn't use technology make their final stand against the robots to save the Earth.

Today is 2019, seven years after this groundbreaking sci-fi film was filmed, cell phones are even bigger parts of everyone's lives.  How was this film so prophetic?  The population of the world has always enjoyed the fruits of labor-saving devices. Go back to the wheel, farming machines, then finally the computer.

Once the internet came along, that technology changed everything.  Computers made our lives faster, however, the internet meant that we could have access to all the information of the world in a device that could fit into our shirt pockets.  The genie is out of the bottle and humanity is never going back to a time without it.  We use that device for communication, entertainment, education, and many other uses.

So now, we see drones of people walking around staring into their 'tippy tappy devices' without being able to talk to a real person without looking at their phone every other second.  For a time it was only young people, now it is everyone.  To me, it looks like the world is just lonely.

I want to challenge you to put down your cell phones from time to time.  Talk to another person face to face.  Smile at each other.  Help others when you can. Do everything you can to make this world a better place.  This way, the robots won't win.  Computed.

If you want to see this groundbreaking sci-fi film for free, it is the first film shot in East Texas to get on Amazon Prime.  www.TheRobotFilm.com
Also, this film is now a play if your group would like to make a production of THE RISE OF THE ROBOTS. 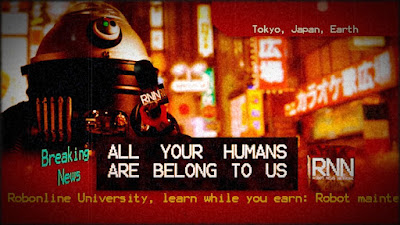